Agapanthus is an exotic bloom that is native to parts of Africa. Its light blue color comes from the pollen contained in the blooms. Some species also produce shades of purple and white instead of blue.

The flower delivers the message of love to recipients of bouquets. It is widely used as a container plant and for some landscapes. The plant can be spread by division or by seeds spreading in the wind.

The tiny bell shaped flowers have a purple to blue color to them. The pollen they contain has a mostly lilac or a blue color to it. The flowers appear in a cluster formation in a globe like pattern.

A. praecox, native to Africa, is often called the Lily of the Nile. Many of the agapanthus share this nickname but it is not accurate. Though named as such, the plant is not a member of the lily family.

This species can be found in the wild in the Cape of Good Hope. Many of the hybrids found also come from this species of flower. Its flowers are more open face than some of the other subspecies.

Shady conditions are often preferred by this exotic flowering plant. A shady location, such as under a tree, is an ideal growing spot. Some may prefer to use the side of a house or along a foundation.

The growth process is slow with seeds as they take time to germinate. From there it may take several month before they can be planted. The initial flowering may take a year or several years for some.

Well drained and fertile soil is key to getting strong blossoms. Additives may be needed if the soil is too sandy, rocky or loamy. Poor draining soil may need to be adjusted to achieve better growth.

This plant is often used to cover spaces underneath shady trees. It is best used in climates where the weather is frequently hot. Plants in containers may need to be moved inside for winter months.

This flower is one of many that is used to symbolize lasting love. It can be combined with other blooms that represent loving feelings. This can be a romantic gesture for many couples to use as gifts.

Some may choose to use this bloom as a symbol of female fertility. This makes it a good choice for celebrating the birth of a child. It may also be used for expectant mothers for baby shower flowers.

The blue shades can also be used to represent truth and honesty. This can often be used to mean honest love or truth in one's feelings. It may also represent sincerity as well as pure and loving thoughts.

Agapanthus flowers are most commonly sold in our florists in Pittsburgh, PA, Murfreesboro, TN, Murfreesboro, TN, Macon, GA, and San Angelo, TX. They are used in summer bridal bouquets or mixed in with white lilies, roses or tulips. Other exotic flowers can be used to accompany this arrangement, but they can also be ordered in bouquets by themselves. 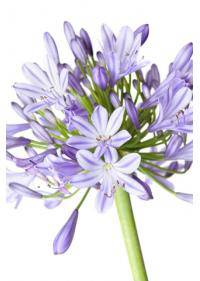