Valid ONLINE ONLY  - Save BIG with FREE DELIVERY use code: FREEDEL20

The aster is a popular flower found in many gardens and bouquets.There are an estimated 180 species in this genus of flowering plants. They can be grown in nearly every climate as some are more resilient.

Some species have longer petals while others appear much shorter. They are frequently planted in gardens to create attractive colors. They may also be used to create floral arrangements and bouquets.

Asters are a late blooming flowering perennial grown in gardens. It is native to many areas, and has been developed for other areas. There are many species in the genus, which offer many color choices.

A. Alpinus is native to Europe, particularly the Alpine mountains. There is a subspecies that is native to parts of North America. Purple, pink and blue flowers are common features for this species.

A. Tongolensis has a more daisy like appearance than other species. It is a very easy plant to grow and produces many unique flowers. The dense foliage makes it a popular choice for many landscapes.

A. Laevis is a native to the United States and parts of North America. The unusual leaves make it an easily recognizable plant in a garden. Clusters of white or pale delicate flowers top dark stems and leaves.

Symphyotrichum cordifolium is also known as the Common Blue Wood. It is native to the eastern areas of North American, such as Ontario. It often grows as a weed in urban areas but may be used in gardens.

Growing Conditions For Gardens And Containers

The aster can grow in average soil if necessary, making it versatile. For rocky or clay soils, it may be necessary to add nutrients to soil. Some poor soil areas may require plant food during the growth cycle.

Full sun is considered optimal when planting asters in the garden. If not possible, then the most sun possible should be used for plants. Container plants can be easily moved to get more light as needed.

Plants should be spaced to allow room to grow and spread when growing. If heavy clustering occurs, it may be necessary to separate them. The plants may be divided in half or split into thirds and replanted.

These late blooming flowers are popular for many fall bouquets. They are often paired with similar colored flowers and fall leaves. Autumn arrangements may feature specialty colors such as amber.

Softer blue and pinks are commonly seen in spring and early winter. Other pastel and light colors are used to create delicate bouquets. The yellow button eye gives them a bright and cheerful appearance.

These colorful mixes are often used for get well or congratulations. They are also popular for baby showers due to their pastel colors. Outdoor weddings often use these flowers as part of the centerpieces.

Dried asters are also used to create dried floral arrangements. These often retain some of the color but it may fade over time. The heads are often dried to use in potpourri for their fragrance. Given its many uses and applications for florists, it is safe to say that the aster is seen in many floral arrangemnts and other flower related gifts. These are especially common in areas like Anchorage, AK, Hesperia, CA, Chico, CA, Long Beach, CA, and Lawton, OK, where asters are easily grown, produced, or delivered.

Asters are known as a symbol of patience for situations or people. This patience may also mean enduring during a period of difficulty. It is also thought to be a symbol for having long lasting love.

They may also be used as a sign of remembrance for those passed on. This makes them popular for creating memorial wreaths and bouquets. The aster color does not often have an impact on its meaning. 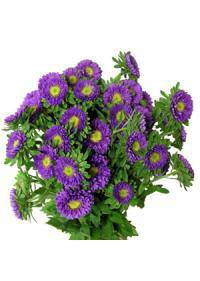