Molucella laevis is best known as the Bells of Ireland flower. This summer flowering annual is native to parts of Turkey and Syria. It is grown and highly prized for its tall stalks of flower clusters.

These are often a fast growing plant which can reach up to three feet. This plant is a member of the mint family, and many are self seeding. They do not fare well in hot and dry climates prone to drought.

Molucella laevis features a green calyx with a white flower center. These are found in clusters on the flower spike in large numbers. The calyx is a pale to emerald green color, making it look unique.

The bell name is given for the appearance of the calyx around blooms. The Ireland name is a misconception, as it does not come from Ireland. It is thought to originally come from Molucca Islands in Indonesia.

These flowers are seen both in the garden and in bouquets for its unique shape and texture. Since they grow quickly, it is simpler to produce and provide for florists in need of its appeal. Areas like Yuma, AZ, Santa Ana, CA, San Antonio, TX, New Bedford, MA, and Reno, NV have great demand for same day flower deliveries with this species.

Self seeding often leads to many new plants forming in the garden. This can lead to an overgrowth in some areas if many are planted. Unwanted plants can simply be pulled or moved to other locations.

Molucella spinosa is another variety that is grown in gardens. It is considered to be a rare species, growing up to seven feet tall. The stems appear red, and are often highly sought after by gardeners.

A cold spell is often needed for the seeds to germinate properly. This is often achieved artificially when seeds are grown indoors. After the cold spell occurs they should be placed in direct sunlight.

When transplanting, choose a full sun location to use for sprouts. This will give them adequate light in order to grow rapidly in summer. Shady locations should be avoided as it does not provide enough light.

Average soil is sufficient for growing plants in any garden bed. For containers, more enriched soil is preferred for the best growth. Soil should also be checked to ensure that it drains after watering.

Fertilizers are often used every four to six weeks for best results. This is done for both planted garden and container grown flowers. Slow release fertilizer may also be added to soil prior to planting.

Containers are a popular garden use for these tall flowering stalks. Many choose to use easy to move containers for portable color stalks. They may be planted in smaller containers or large heavy containers.

These can be used to create a row of privacy on a deck or patio. The Bells may need to be thinned if they start self seeding in pots. They may be grown by themselves or with trailing plants around edges.

The color of the calyx often reminds many of money, indication wealth. For this reason it has become a symbol for luck in money and wealth. Bells of Ireland are given as a good luck bloom in floral bouquets. 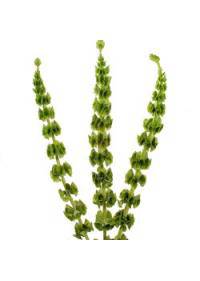