The carnation is a widely recognized flower used heavily in bouquets. It has many meanings that allows it to be used for almost anything. The ruffled appearance makes it a top choice for bouquets for women.

This flower has been heavily cultivated for almost 2,000 years. They are often worn for special occasions as a corsage or boutonniere. It is considered a staple for many who create cut flower bouquets.

Carnations are a species of Dianthus, in the family Caryophyllacea. This perennial plant though some may be available as annual flowers. There are several popular varieties used for gardens and landscaping.

C. Barbatus is a biennial that behaves like a short lived perennial. This fragrant bloomer is also known as Sweet William, a garden staple. It often self seeds in gardens ensuring many years of colorful blooms.

D. Deltoides is a common staple for rock gardens due to low height. It is a popular plant for anyone looking for easy upkeep in a garden. Bright red varieties are among the most popular of the flower colors.

D. Plumarius is often called simply "Pink" and does well from seed. It is versatile and can grow in containers as well as rock beds. Soft pink blooms bring a delicate touch to any planted location.

Growing Carnations In The Garden Or Landscaping

Carnations can survive and bloom in varying levels of sunlight. Full sun is often recommended, but light sun can also be an option. Because of this, it is popular for those who want easy flowers.

At least 12 inches of space is recommended between the plants. This allows them to grow and spread out in the garden over time. Smaller varieties may be put closer together for more coverage.

Well drained and light soil is recommended for the best results. Some species may be more tolerant and adapt to rockier or heavy soil. The height ranges between 4 to 24 inches tall depending on species.

Reds, pinks and whites are the most frequently seen for bloom colors. Specialty colors are often cultivated for holidays or special meaning. Special colors may include deeper reds, stripes or green and purple.

Common Meanings And Symbolism For The Flowers

There are many meanings associated with the color of the carnation. The symbolism is often the reason a color is chosen for bouquets. This is often a way to express feelings when giving flowers or plants.

White is a symbol for good luck and for pure love, such as platonic. Striped varieties are used for regret or a refusal of an offer. Dark red often stands for deep love, especially when given to a woman.

Green blooms are often seen only for St. Patrick's Day celebrations. Yellow is often a symbol for expressing disappointment or dejection. More exotic colors may be cultivated with no set meaning to them.

Use Of Carnations In Bouquets And Arrangements

When choosing a bouquet many include carnations for their appearance. The light and fragrant flowers offer a lovely soft fragrance. This is why they are found in everyday bouquets to special gifts.

Boutonnieres and corsages often feature several carnations in them. Because of this, choosing the perfect color is often important. These are often used for weddings, proms, dances and other parties.

The sale of carnations have been prevalent in cities like Allentown, PA, Fayetteville, NC, Escondido, CA, Washington, CT, and Ventura, CA. However, while inexpensive, these are a commonly used flower for many arrangements in many other places. They have a quaint charm that is both elegant and delicate at once. This makes the carnation a quick and easy way to show ones' feelings. 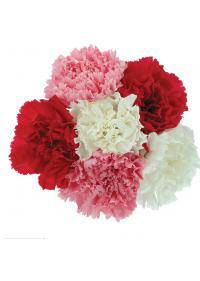