Hypericum is best known as St. John's Wort to gardeners and florists. Many species may be called St. John's Wort as it is a common name. It is available nearly worldwide and is adaptable to almost anywhere.

It is most often a perennial however it can be grown as an annual. Large flowers that are often yellow give this plant a distinct look. Deciduous and evergreen leaves are available with some of the species.

H. perforatum is best known as the medicinal St. John's Wort plant. It is grown and harvested by many medical and research industries. The name "Common" is often attached to this species to set it apart.

It is a yellow flowering herb that is native to parts of Europe. It has been introduced in many places around the world as an herb. It can also be found growing in the wild in many parts of the world.

Common St. John's Worts are a creeping rhizome that spread quickly. They often reach a height of three feet with translucent leaves. Small oil glands are present in leaves, making them appear perforated.

The H. calycinum species is commonly known as the Rose of Sharon. It may also be called Jerusalem Star by some gardeners and florists. This plant is a low growing shrub that may also appear prostrate.

This shrub is woody and tends to creep in landscaping or gardens. Flowers are often solitary and have deep green foliage present. In North America, the name Rose of Sharon refers to another plant.

H. olympicum is another available species for cultivation and gardens. It is drought tolerant and able to adapt to many zones and areas. Bright yellow blooms are visible with silvery and green foliage.

Growing Conditions And Information For Gardens

Slightly acidic to slightly alkaline soil is best used for hypericum. This may be created by using additives or organic matter in beds. This will ensure good root growth and blooms through the seasons.

Water needs are fairly average, plants need water only when dry. Over watering should be avoided to prevent rot and mold formation. Plants should not be allowed to dry out unless drought resistant.

Sunny areas are often best as it increases plant size and growth. Partial shade may be used if there are no sunny locations in beds. Some species of hypericums may require more light than others do.

Pruning should be done in early spring to better manage growth. After this, the plants will often seed and spread on their own. This often leads to much faster spreading of new flowering plants.

Division may become necessary if the garden becomes too cluttered. This should be performed in the fall before the first frost occurs. Removed plants can be transplanted elsewhere or discarded if needed.

Flowers may be given to those who are grieving or losing a loved one. When used in this manner it is thought that they relieve depression. This is partially due to its uses in medicine as an antidepressant.

This flower is often associated with cheerfulness and inspiration. This makes it a popular choice for artists and creative individuals. Hypericum may also be given to those starting new paths in their life.

Hypericum berries can most easily be found in places such as Tyler, TX, Springfield, MA, Rochester, NY, Moreno Valley, CA, and Broken Arrow, OK. Given its many colors and diverse meanings, they can be a very versatile aspect to any arrangement and will very easily accentuate almost any type of flower. 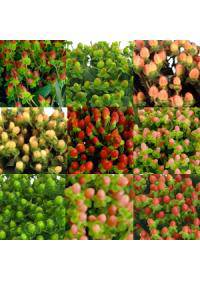