Lilac flowers can be found in more than just its namesake color. Some species produce blooms in burgundy as well as white and yellow. These species are used to create a unique wash of color in gardens.

Special cultivations, such as striped blooms, are highly prized. These are often found at festivals or in a local botanical garden. Some of the hybrids may also be used for gardens or arrangements.

The lilacs family contains at least twenty species of flowering plants. It is a fragrant flowering woody plant related to the olive family. It is native to areas of Europe and Asia, and cultivated elsewhere.

Often, lilacs grow into small shrubs or trees up to twelve feet tall. Flowers are often produced in the spring, typically purple in color. Some species may produce flowers in late spring or early summer.

Syringa vulgaris is often the most commonly seen variety for planting. It has a strong fragrance that makes it a popular choice for gardens. Blooms are often a pale purple, with some featuring a light blue.

Syringa reticulata is a common small flowering Japanese tree version. The blooms are often a creamy white, with some appearing off-white. Subspecies can be developed and grown in parts of Russia and Korea.

Growing Conditions For Garden And Cultivation

Full sunshine is the best way to get highly flowering lilac plants. While it can be grown in the shade, it will flower less frequently. If blooms are not a concern, they can be used as a shade plant.

Many of the species are less particular about the soil conditions. Many types are suitable for even vibrant growth in most species. Only very heavy clay soils may need enriched in order to survive.

Heavy fertilizing and feeding may produce rapid growth of leaves. While this increases the size of the tree or shrub it limits blooms. Flower growth may be stunted or only produce a few flowers per year.

Pruning is often performed if branches appear to be dead or dying. Some may prune to limit the size of the plant and reduce growth. Pruning is best done after the blooms have formed or fallen off.

Common Landscaping And Uses For Gardens And Homes

Lilacs are often used as landscaping bushes to cover larger areas. Larger species can add privacy when planted in rows along lawns. They may be trimmed back to make a more uniform boxy or fence shape.

Wedgewood Blue varieties are often the most popular for landscapes. They are often mistakenly called tree lilacs though they are not. This mistaken is common due to the height reached at peak maturity.

Property borders are not the only use for these ornamental plants. Some may be trimmed down and placed along pathways and bed edges. This can create a fragrant attraction to any lawn or garden path.

Container pots are another good use for these flowering shrubs. Lilacs can be pruned and kept small to house in large containers. This type of treatment often takes careful planning and upkeep.

For its many uses as a beautiful and fragrant flower, Lilacs are typically available for order around Stockton, CA, Nashville, TN, Lee's Summit, MO, Scottsdale, AZ, and Little Rock, AR. The several meanings of sending lilacs are as follows:

Purple blooms are thought to indicate the start of new love feelings. It is often a popular gift during initial dating periods for couples. It may also be given to new friends to symbolize the friendship.

White blooms often present the image of innocence and sincerity. These are typically given in mid spring for Easter or for a birth. Lilac may also be mixed into a wedding bouquet or a holiday basket. 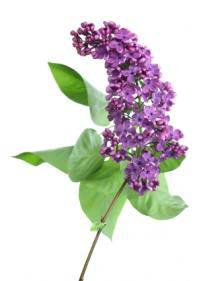