Mums are commonly used name for the flowering chrysanthemum plant. There are at least 30 species available in this blooming family. Many of these species are native to Asia and some parts of Europe.

These late season blooming plants are popular for fall and summer. They are often planted in large groups for mass coverage in lawns. These can create spectacular displays of solid fragrant blooms.

Chrysanthemum indicum is one of the most popular species available. These are often found in nurseries and floral locations for blooms.

This is often the most widely available species for North America. These types of mums are usually what are put on cut arrangements; they are readily available in areas such as Virginia Beach, VA, Roswell, GA, Pearland, TX, North Las Vegas, NV, and Port St. Lucie, FL but can be delivered to other areas as well.

Pompons are a nearly fuzzy type of head, with a dense appearance. The blooms are small but appear to have double the petals of others. They have a near globe shape instead of a flatter bloom surface.

Chrysanthemum pacificum is a species native to some areas of Japan. Its appearance is unique compared to other species of the flowers. The leaves have a more waxy appearance and smaller flower clusters.

C. segetum is often called corn daisy for its daisy like appearance. Petal appearance is more spread out and sparse compared to others. It has been cultivated to grow in other locations of the world.

Mums are a hardy plant that can grow in many different conditions. Many varieties are cultivated to be resistant to insects and drought. Some are also able to resist early frosts and can survive cool temps.

Full direct sunlight is often recommended for good growth and blooms. It is possible to get good results from partial shade or full shade. Full sun may require more water if the weather becomes too hot.

Water is an important factor for encouraging growth and flowers. Soil should be kept slightly moist and not be allowed to fully dry. Over watering should also be avoided as it can lead to stem decay.

For winter hardy plants, continue to water until winter has arrived. For winter, plants should be cut back to just above the soil level. This will prepare them for winter and for the next growing season.

In some cuisines, such as Chinese, the cooked leaves are often eaten. The leaves may be boiled or stir fried and served as a leafy green. Petals may also be added to some broths types for better flavor.

The mum is also thought to reduce indoor pollution as a houseplant. For this reason, many prefer to keep them as indoor houseplants. This is thought to help keep the home air quality more controlled.

These flowers are often a symbol of truth, fidelity and wealth. Rich blooms can be used to send a message of prestige or achievement. This is a common meaning with red or deep purple or orange flowers.

White, yellow or pale blooms can be used to symbolize hope and truth. These are often used for congratulations or for a loving bouquet. This gives mums many meanings when being used for an arrangement. 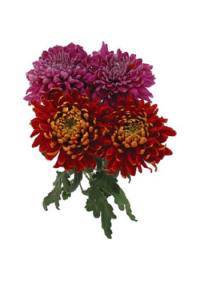