The Protea is a unique plant that is sometimes called Sugarbush. It has a large bloom head with distinctive pastel or orange petals. There are at least 81 garden varieties that have been discovered.

It can be found in gardens and landscapes as well as in the wild. It has several meanings that make it a popular bloom for bouquets. It is also used as a dried bloom for dried floral arrangements.

P. caffra is most often known as the most common of the species. It can grow as a shrub or as a tree depending on the area and climate. It may be found growing on rocky edges or in an open grassland.

Flower heads often appear alone but some may appear in a cluster. A pale pink or creamy white center is often found in the blooms. There are also several subspecies that have their own variations.

P. nitida is a South African species that has more yellow blooms. It is the only member of the species that timber that is usable. It is very slow growing and is the only one that grows into trees.

The King Protea is also known as P. cynaroides, a soft pink flower. This is often the species used when seeking cut flower bouquets. The center of the head is a creamy yellow which gives it contrast.

This woody shrub has distinct dark green leaves that are glossy. The plant often reaches heights of up to three feet at maturity. In some habitats it may continue to grow to heights of six feet.

Growing Conditions And Uses For Landscapes And Gardens

In the wild, these plants grow in mountainous and rocky terrains. Acidic soils that are loosely drained promote some solid growth. The reason for this is that the plants form necessary adaptations.

In a garden however, more care is needed to promote better growth. Acidic soils low in phosphates are often ideal when preparing soil. Sand, loam and compost are typically added to create the right mix.

Organic fertilizer, such as bonemeal, can also be added as needed. Care should be taken to avoid overdoing it with the fertilizer. Too much or too little can cause rot or scorching of the leaves.

Watering should be carefully managed to avoid heavy soil creation. In sandy mixes it may need less water more often as sand can clump. This creates a concrete like mixture that can choke the plant roots.

It is thought that there are up to 1,400 unique variations for blooms. This includes size, shape and color of the parts of each plant. For this reason many use it as a sign of change in an arrangement.

Its easy adaptation in the wild is a symbol of hope amid adversity. Some may choose to use this when a loss of a loved one has occurred. It may also be used to cheer someone after an illness or injury.

The most common meaning is one of strength and diversity in life. The strong blooms can survive harsh conditions such as drought. Florists use the exotic Protea blooms for romantic bouquets as well.

Its many definitions made this flower a very popular choice for recipients in the Gary, IN, Grand Rapids, MI, Boise, ID, Chandler, AZ, and Frisco, TX areas. Many arrangements made in these places have been combined using the breathtaking Protea. 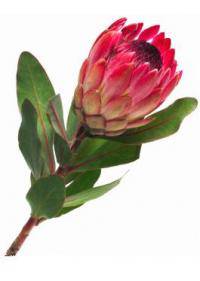