The stock is a flowering plant named for Pietro Andrea Mattiolo. It is grown as an annual or as a perennial flowering garden plant. The blooms often appear in single or doubles in many different colors.

There are at least 140 known unique species to this flowering plant. These are mostly shrubby herbs that are found in the Mediterranean. Some have been cultivated to grow in other climates and locations.

M. incana is one of the best known species of this plant available. It is commonly called hoary or tenweeks by gardeners and cultivators. Many colors are available for the blooms, such as white and pink.

These are often grown as an annual and begin to flower in summer. This is partially why the name tenweeks has been associated with it. They are often planted in early spring for delicate summer blooms.

M. longipetala is an ornamental plant often called Evening stocks. These are best known for their fragrance released in the evening. This fragrance often continues through the night in many locations.

Flowers contain four petals each, and come in one of several colors. Purple is common, ranging from pale to deep purple shades for some. White is another option available, creating a stark display at night.

Other Evening stock varieties include M. bicornis and oxyceras. These both produce fragrant blooms that are open and scented at night. These can be used to line a path or to create a patio decoration.

These plants often grow low to the ground, ideal for ground cover. This is best achieved when planted in clusters and allowed to grow. The spreading nature can lead to a fragrant patch of landscaping.

It has been known to be cold resistant and can survive early frost. This makes it suitable for any zone in places such as North America. Cooler temperatures are often preferred as it does poorly in heat.

The seeds are often started indoors during late winter for spring. After the last frost, the sprouts are often transferred to the garden. If watered properly, blooms may begin to appear in early summer.

Blooms will often appear from the spring until late fall months. They are often used as coverage in flower gardens for seasonal color. As they bloom longer, it provides a backdrop for flowers not in bloom.

Over watering is a common garden problem for these flowering plants. Poorly drained soil is another concern to keep in mind for planting. Slightly dried conditions are often preferred for the best growth.

Those using containers should note the plant does not stand upright. For this reason it is popular as a trailing plant for windowboxes. It may be mixed with other trailing plants for a low hanging display.

Low hanging displays are often used on patio fences for privacy. This can provide some shade if used in a hanging basket as well. Tall flowering plants are often mixed in for more variation in growth.

Stocks are also associated with a long life and happy existence. White may also be associated with purity and innocence in life. This gives the stock many options for sending someone a message. 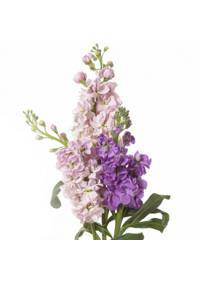